Bluetooth is a technology that allows devices to communicate and share data over short distances without wires. Swedish telecom manufacturer Ericsson created the technology in 1994. Bluetooth is an open technology standard, meaning that anyone who joins the Bluetooth Special Interest Group and adheres to well-outlined standards can create Bluetooth devices. While Bluetooth technology is prevalent in devices that need to transfer small amounts of data, the technology’s limitations have prevented it from becoming the de-facto wireless technology. 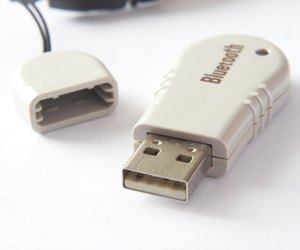 Bluetooth technology was originally designed for sending a small amount of data over short distances.

The rate of data transfer between Bluetooth devices is about three megabits per second. This is significantly lower than Wi-Fi, the other predominant wireless technology, which transfers at 54 Mbps. Bluetooth is also too slow to stream music or video, which requires at least 10 Mbps. The new Bluetooth standard, Bluetooth 3.0, will allow for transfer speeds of up to 24 Mbps by using a Bluetooth connection to set up a separate Wi-Fi connection. This combination of Bluetooth and Wi-Fi technology allows the connection rate of 24 Mbps.

Most Bluetooth devices, especially those that run on battery power, are Class 2 Bluetooth devices. Class 2 devices have a range of about 10 meters, or around 30 feet. The range limitations are meant to avoid the quick depletion of the battery. While the Bluetooth signal will work through walls, the more objects that are in between the devices, the less overall range the devices will have. Class 1 Bluetooth devices have a range of about 100 meters, but the size and power consumption needed to create a Class 1 signal means that small wireless devices could not use it and are confined to the 10 meters of the Class 2 protocol.

Bluetooth devices work with the 2.4 GHz radio band, which is the same unlicensed frequency used by many other wireless devices. If many devices in the same area are all using the same stretch of bandwidth, it can lead to overall network problems, as the signals collide and information has to be resent. The Bluetooth signal was designed to change it’s frequency many times per second to reduce this interference, but if enough devices are trying to use the same small stretch of bandwidth, interference is inevitable. Bluetooth 3.0, being used in devices created in 2010, uses the 6-9 GHz spectrum, so it will have much fewer interference issues. Bluetooth 3.0 devices are also capable of transmitting at 2.4 GHz to communicate with earlier Bluetooth technologies. Bluetooth 3.0, running at 2.4 GHz, has the same issues with interference as earlier Bluetooth technologies.